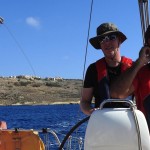 Finished up in Tucson.

When I am writing this post I am back home again after my work trip to Tucson, Arizona.

We have had a good stay and the work went really good even better than expected. We did not think we would find a solution when we visit this power plant. More that we would collect data which could be analysed when home again.

But when we did all the measurements we decided to test a thing or two. which those tests we managed to solve the problem.  At least for now. Some modifications will need to be done to make everything better but with the work around we did it made a huge difference.

So we can say the trip paid itself off and was worth it.

We had one more Sunday off in Tucson. This became more of a cleaning day. After the cleaning was done a lazy day at the pool looking at hummingbird birds and in from of the television looking at movies on Netflix.

The trip home could be changed as we where more or less finished so instead of travel home on the 2nd of December we could rebook for the 26th of November.

This time there was much more people travelling which surprised me. After all warnings which was told on all the news in USA. Stay home during Thanksgiving weekend. This to avoid spreading the corona virus. Seems like many did not care at all.

There was still was less people on the airports than during normal times. The flights was quite full though. Specially the short distance flight between Tucson – San Francisco and between Frankfurt – Zurich.

I did arrive good in Zurich late Friday afternoon and took the train from the Zurich airport to Frauenfeld. The train was empty at least so no problem finding a seat as it is normally.

Saturday it was a lazy day. Only to hang up all Christmas lights etc. after that only enjoying the time and a good diner which Diana prepared. After this watching a film or two before bed.

I wish you all a good 1st of advent. Cheers 🍻

As you all might understand of the title I am still in Tucson.

The first week working went just fine and we came as long as we planned in.

As we where ready as far as we could get already before Saturday lunch we went to our hotel made ourselves ready. Then we drove to a subway for some lunch. After lunch we decided to drive out to the air and space museum. So Saturday afternoon was a time to be a tourist and as we are in Tucson we thought why not go seeing the famous aviation museum Pima Air & Space Museum.

After the subway lunch we drove out direct, around 13:00 we where in the museum. It was really a impressive and huge museum with all kind of planes from the start of the aviation era until recently.

There was all kind of private and planes plus most type of war planes and helicopters.

In the en we where really tired after walking around on the ground, it took us 4 hours to pass trough most but still we did miss a lot, as for example the space part of the museum.

On the Sunday we decided to drive up in the mountains which surround Tucson and have a look at the views and the terrain with all the cactuses which grows in Arizona. It was quite impressive to see thes tall cactuses who are several meters high. We where back at the hotel again around 16:00 again and relaxed until diner.

After the Sunday the rest of the crew who should help with our work here arrived.

A trip to Tucson, Arizona USA.

I am right now in Tucson Arizona and it is nice to be here, but the organisation to be able to do so was a really hard work.

We have a customer who have asked us to visit since 3 month, but with the corona crisis around the world it is not that simple. Specially as I live in a country that’s on the US list. To enter USA you will need to stay in quarantine for 14 days.

My colleague and I came up with a quick idea to do so.

That was that we travel to Barbados and stay there for 14 days. Perfect as from Barbados to USA no quarantine would be needed… Who would not like to sit in quarantine on Barbados? I wouldn’t mind if I say so.

As we have home office we would be able to work as normal. So no problem there either.

Anyhow our management saw a big problem with this because, how to explain to the upper management why we are sitting on Barbados for 2 weeks!!

As they did not like to explain this. They contacted a US emigration layer for suggestions instead (wonder what that costed). The emigration layer come up with the idea that we could visit under the National Interest Exemption regulations.

Letters had to be written to explaining why. This took sometime as you can imagine. When we had everything ready it was sent to the US Embassy including copy of passport, visa etc.

Then came the info that I needed to send a copy of birth certificate and passport.

OK next problem to get hold of a new birth certificate I needed to contact Swedish authorities.

When it finally arrived, I send it to the US embassy. A day later I hade an OK and could travel..

Then came the next hurdle. I needed a Covid-19 PCR test…hmmmm. I though that would be easy, As wrong I was. The problem is that the test must be less than 72 hours when arriving USA.

I learned that most laboratory’s was so occupied that I should count 72 hours before I could receive the result. It was only to call around asking. Finally I found a test center who told me, they could ask the laboratory to do it as express, but without promises.

I booked a time with this info and in the end I had my answers after 24 hours. I was negative which was positive. The day after I received my result, off I went.

The flight from Zurich to San Francisco went perfect and on a plane with space of 300+ passengers we where max 30 persons, more or less everyone had its on toilet.

When arriving emigration in San Francisco I was a little worried, would they as well accepted all paperwork. The result was good and I have never before been able to come through emigration quicker (it took maximum 5 minutes then I was out).

On to next plane and in Tucson my colleague from the Netherland was already waiting.

We said hello quick and went to pick up our rental car, then drove to our hotel.

In the end it was a 27 hour trip which was over. tired as we were we had a beer and then it was time from bed.

Here comes the last movie from our this years sailing adventure!

We hope you enjoyed all parts, as much as we enjoyed doing them

Here comes another movie we want to share with you!

For a change, we Patrik prepared a movie from our summer holidays for you!

PS: The paint work on our house is completed and we are more than happy with the result!