Patrik had booked a berth at the marina in Beaulieu-sur-Mer for the following two nights. As always, we were excited to explore a new city. We also hoped to finally being able allowed to give Luna Azzurra a proper wash! She was covered in a salty crust and glittering in the sun like a diamond 💎

So, off we went, towards the French Riviera. Due to the absence of wind, so we had to use the engine again, oh dear! On our way we successfully fished a big unicorn balloon out of the water 🦄 – a little less damage in the sea!

At approx. 2 p.m. we arrived at the marina, filled up diesel at the fuel station and announced our arrival. Our berth was right there, at the entrance which suited us, since the marina was very tight. Unfortunately, boat washing was forbidden….again *aaarghh*….due to water shortage. Understandable, but annoying, nevertheless.

It was like an oven in the marina, but the surrounding was pretty, and we looked forward to visit the town. After the registering at the harbour office, we took a short stroll around and bought some fresh salad for dinner. Tomorrow we would do a proper visit and grocery shopping. We also planned to do some sightseeing, “Villa Kérylos“, a replica of an ancient Greek villa, seemed like a good choice.

Said and done! The next morning was sunny and hot again. Firstly, we did the grocery shopping, brought everything back to the boat and left again, in search for the villa.

On our way we were positively surprised what a pretty city Beaulieu is. We were definitely happy to have chosen this place for two nights.

Villa Kérylos amazed us! Is absolutely worth the visit and entrance fee (approx. 14 Euro). We enjoyed it very much. On our way out we realized that next to it lies the residence of the Eiffel family – might it be him, who built the Eiffel Tower, we were wondering…?!

Back at the boat we relaxed a little and later got ready for dinner. Nearby was an exotic looking Moroccan restaurant where we planned to eat. Sadly it was closed, so we chose an Indian restaurant near the marina. We sat outside but soon it started to drizzle whereof soon became a thunderstorm. At least we stayed dry under the umbrellas ⛈

However, the restaurant was – simply said – a catastrophe. I can’t remember having had such a bad service and the food could have just as well been something microwaved…. Very disappointing! ☹

Back at the boat we had a last glass of red before we went to bed. Good night 😴🌙

The weather was a mix between sunshine and clouds, but OK so far. Shortly before 11 a.m. we said good-bye to Beaulieu-sur-Mer and headed for Italy. We wanted to get to San Remo today and anchor there.

Due to lack of wind, we had to motor-sail again. Too bad! After two o’clock we passed Menton and with Ventimiglia we entered Italian waters. The grey clouds were still present, together with the waves. Hopes were still high that it wouldn’t get worse!

After a bumpy ride we finally arrived at our destination and at five we dropped the anchor. Good holding this time, since it’s a sandy bottom 😉

And hey, the sun came out 🌞 We treated ourselves to a short aperitif and afterwards it was time to prepare dinner: Vegan, homemade burgers and fresh salad *yummy*

Unfortunately, the night was pretty uncomfortable due to non-stop swells….. Yeah well, always something, isn’t it? 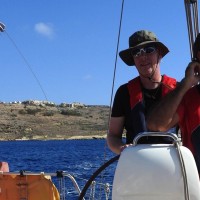