The next day, 24th August, we did the last shopping, fresh veggies, fruits and bread and around lunch time we left the berth. Since we had some extra days now, we decided to spend another night at the island and anchored “around the corner”, a nice bay east of the marina. We did some swimming, paddling, Patrik continued to clean the hull….well, it was a relaxing day, which we enjoyed a lot!

The night wasn’t that lovely though! After midnight I woke up by some noise, people partying on a nearby boat, screaming, singing, loud music…. It wasn’t quiet until around 03 a.m. As usual, Patrik didn’t hear a sound and was able to sleep peacefully (which annoyed me even more!) 👿😤

Anyway, the next day we left the island and headed for Baie de Bonporteau. ETA was scheduled for 2 p.m. and after a calm (without wind) trip we dropped the anchor. As always for us (but WHY???), it took two attempts for the anchor to hold safely. The bay was very crowded, and a service boat made its rounds, selling ice cream, soft drinks, snacks, and even prosecco 😉

Later in the afternoon the bay started to get empty. St. Tropez is just around the corner, so the hip yachties and partygoers had to rush there of course. We were just a handful of boats left and enjoyed the peaceful evening. We decided to spend the next day here as well – doing bugger-all – and would leave on Saturday, 27th August.

And that’s exactly what we did, enjoyed a wonderful dolce far niente day with heaps of sunshine 🌞🌺😎

Saturday came and we left around 11 a.m. Our aim was to anchor at the entrance to the Golfe de St. Tropez, on the north side and outside a place called Ste Maxime. But the closer we came the darker became the sky. Apparently, a thunderstorm was building up, so we turned around and headed for the Baie de Canebiere (Canoubiers), which lies opposite and offers much better shelter.

We quickly found a good spot close to the shore, not too deep and on the 2nd try (what else? 😇) the anchor was safely buried in the sand (3 p.m.). It was also bread-baking day (the dough was prepared the day before) and later in the afternoon the boat smelled of freshly baked bread – voilà!

Brigitte Bardot lives here, by the way, in one of the mansions scattered around the shore and we believed to have spotted the correct one. Especially since some tourist boats – which weaved their ways between the anchored yachts – stayed a moment longer outside a particular villa. Also, the tourist guide talked excitedly about the famous actress.

Well, she certainly has my sympathy as she’s a resolute defender for animal rights since many decades 🥰 During the night we heard some dogs bark – maybe they were her rescue’s…? 🐕🐾

Ah, apropos, the thunderstorm never came. Instead, the sun showed up again and it became humid and hot. So we enjoyed the rest of the afternoon with the nice view, showered and had a tasty dinner.

Morning came and after the obligate WOBBLE we started the engine after 10 a.m. and left the bay.

The longer we motor-sailed (poor wind unfortunately), the more we thought about changing our plan. So in the end we decided to try our luck and have a look at the île Ste-Marguerite, opposite Cannes. And *yeah*, we were fortunate enough to find a marvellous spot just at the foot of the famous Fort Royal. At 3 p.m. the anchor sat steady in the sandy bottom.

Why famous? Well, it was here that the mysterious “Man in the Iron Mask” was imprisoned from 1687-1698. I bet you saw one version of the movie. Apparently, in reality, it wasn’t a mask made of iron, but of velvet. But who the person was still remains a mystery….

However, we slept tight and weren’t disturbed by any ghosts (or party maniacs) 👻 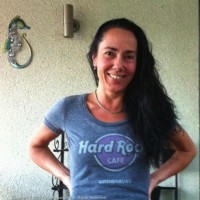